Although most of these calls were okay, they do tend to be of the kind where officials in the past might have "let them play" but now the sceptre of a possible replay review seems to make them reluctant to do so. But of course we know that any challenge to these calls would probably have been ignored.

There were plenty of missed calls in this game. Here's a few obvious ones:

This one didn't matter, because Dak Prescott scored anyway, but Leonard Williams has to break this habit of lining up in the neutral zone a few times every game. On this occasion, nobody noticed. 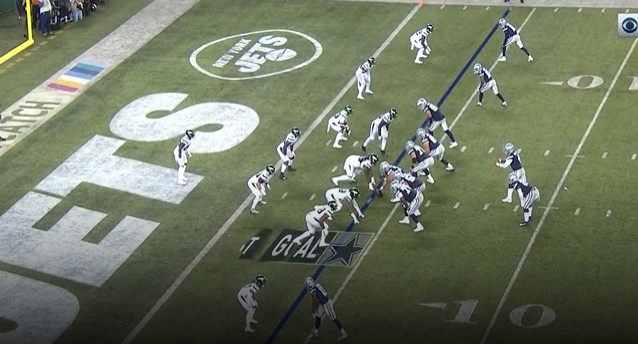 This one did matter, as you can see the right tackle is already in the process of dropping back into his stance before the ball has been snapped. Dallas converted here on 3rd-and-9 and went on to score their first touchdown four plays later, but this should have been a false start.

This one worked in the Jets favor. Clearly the time had run out before Dallas snapped the ball on 3rd down at the end of the first quarter. The pass was incomplete, but the play never should have counted and Dallas should have got a second chance to convert on the first play of the second quarter. 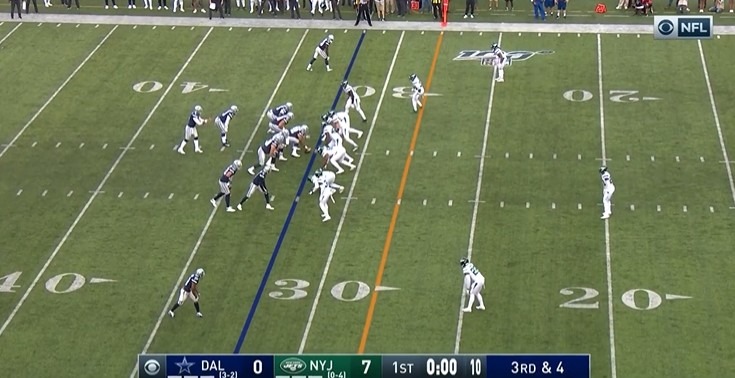 There was also a flag that was picked up after a Jets punt. On the play Arthur Maulet appeared to be blocked in the back, but the Dallas player did the "who me?" thing with his hands and that was convincing enough for the officials to change their minds.

There was another bad missed call on a receiver screen where Shell made an athletic block on the outside, but it was as clear of a block in the back as you'll ever see. The officials missed it.

Finally, could Marcus Maye have been called for pass interference on the failed two-point conversion? Based on what went before, he easily could have been, but it would have been a bad call. Aside from the ball not being catchable, the receiver had initiated the contact to box out Maye who is entitled to hold his position.

We've been breaking this week's game against the Cowboys. We wrap up today's analysis with a look at the…

QuickFix: Saucy Nuggets from the Jets' win over Dallas