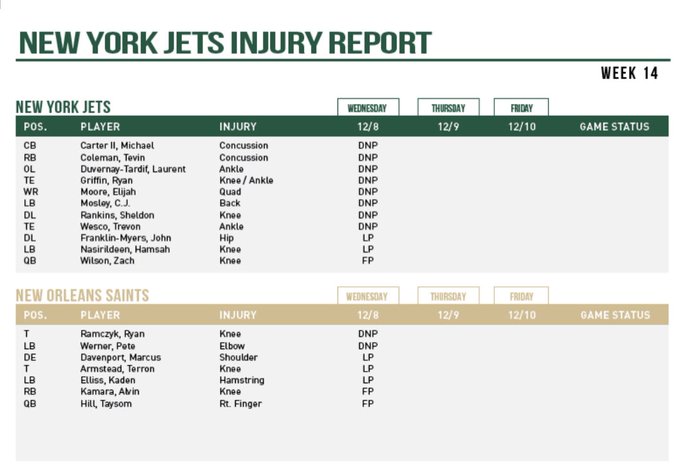 Coach Robert Saleh said that Moore has a quad injury. He missed significant time with the same injury in preseason so it seems unlikely he'll play on Sunday.

With Corey Davis just having gone onto injured reserve, the receiver group is short-handed this week but Keelan Cole has been activated from Covid-19 reserve. The Jets protected Vyncint Smith on the practice squad in case they need extra cover there.

With Coleman's status up in the air and Ace Carter still on injured reserve, Ty Johnson may get the start this week. Austin Walter was just added to the active roster and perhaps La'Mical Perine will finally get a shot at being active.

It sounds like the other players who missed practice have a better chance to return to practice during the week. Each of these either missed Sunday's game due to injury or was hurt during the game.

In other injury news, Bryce Huff could be back next week and Saleh is still hoping Mekhi Becton will be back this season but isn't worried about him long-term. Finally, starting cornerback Brandin Echols was designated to return for practice. The Jets will have the option to activate him for Sunday's game if all goes well.

The Jets also made a practice squad addition:

Benton restores the Jets' safety depth after Jarrod Wilson was released yesterday. The 25-year old was undrafted last year out of Liberty and played in one game as a rookie with the Browns. He's since spent time with New England and Seattle.

Link: Bent assesses whether Braxton Berrios should get an extension

Via GGN, here's an article about wide receiver and return specialist Braxton Berrios and whether he's worthy of a…