The Jets have released the final injury report for Sunday: 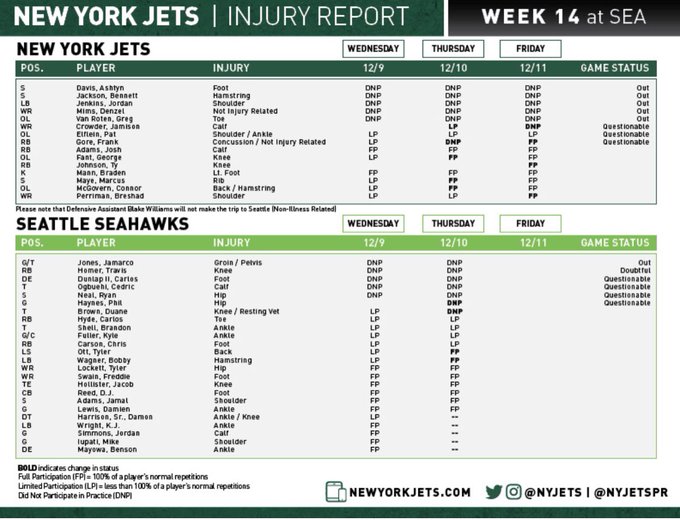 None of these five absences are unexpected if you've been following along this week. We should see increased opportunities for the likes of Jeff Smith, Bryce Huff and Matthias Farley. It would also be good to see rookies like Jabari Zuniga and Cameron Clark involved.

It was confirmed that Crowder suffered a calf injury early on in practice yesterday so his status is up in the air. Once again, Perriman gradually worked his way towards being healthy during the week, though.

Elflein seems more likely to play despite being questionable. Interestingly, Gore is also questionable despite practicing full in today's walk-through.

You can expect the Jets to place a couple of players on injured reserve while activating Bless Austin and maybe Trevon Wesco this weekend. Gase has already stated that Austin will start on Sunday. They'll also call up a couple of players from the practice squad.

Seattle's full injury report will be out later but they had seven players who did not practice and another four who were limited yesterday. However, Carlos Dunlap remains the only starter not practicing due to injury. As you can see, he's listed as questionable for now, with only one player ruled out and one doubtful.

With Ashtyn Davis and Bennett Jackson expected to miss at least a game or so, the Jets need some…