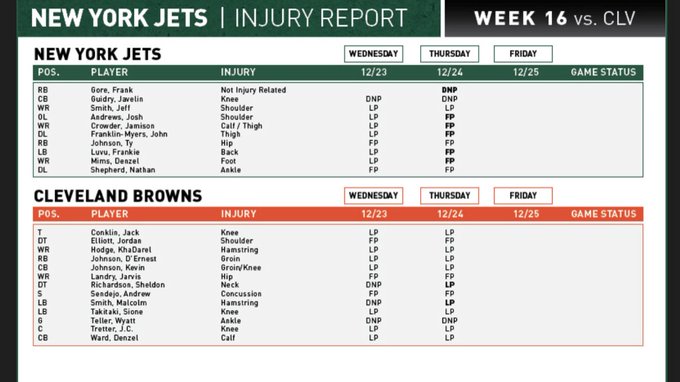 It would be interesting to see what the Jets would do if Guidry is unable to play. The team had been planning to keep the rookie as the slot cornerback for the rest of the season with Arthur Maulet having moved to free safety.

The obvious thing to do would be to give Corey Ballentine the chance to play some defensive snaps for the first time all season in that slot role, but they may view him as just a special teamer. However, none of the other cornerbacks on the roster or on the practice squad have much experience of playing in the slot.

Another option would be to put Maulet back in the slot and make Matthias Farley the free safety.

Adam Gase was hopeful that tight end Ryan Griffin can still be reactivated to play on Sunday despite being added to Covid-19 reserve yesterday. He was less certain about running back La'Mical Perine, who has been practicing but is on injured reserve.

Elsewhere, the Jets should have good flexibility as everyone who was limited yesterday practiced full on Thursday apart from Jeff Smith.

Merry Christmas and welcome to today's coverage here at JetsFix.com. Let's kick off today with some Jets links:…

Guest Post: "A Christopher Carol" - an epic festive masterpiece from R in CT

Meanwhile, at stately Johnson Manor …. It’s Christmas Eve and the halls are decked, a hearty fire is crackling,…