The first injury report of New England week is out: 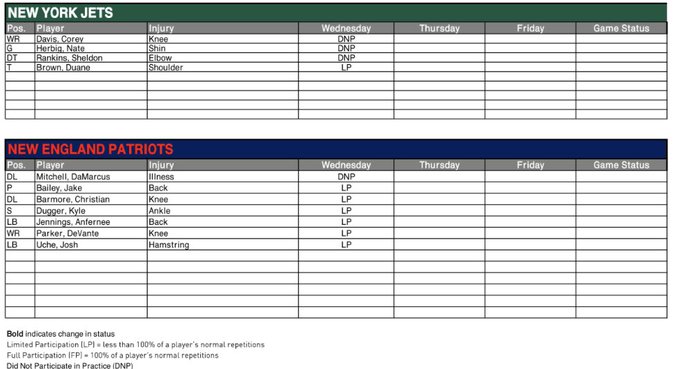 Although Robert Saleh has said he's not concerned about Herbig, who is currently starting at right guard, the Jets did bring Laurent Duvernay-Tardif back in for a workout today. Dan Feeney could be an option to start if Herbig can't go.

Davis remains day-to-day and Saleh has said that he doesn't think Rankins will need to go onto injured reserve. We've been told that the short term plan to plug that gap will be for Tanzel Smart to be elevated from the practice squad.

Although Brown was limited, Saleh had actually indicated this was going to be a rest day for him, so he wasn't scheduled to practice at all. At the other tackle position, Saleh confirmed that Cedric Ogbuehi will start again at right tackle this week, but Max Mitchell has been activated from injured reserve so he can practice for the next three weeks and be added to the 53-man roster at any point during that time.

Poll Results: Confidence in the head coach and GM is through the roof at the bye

Each month, we've been looking at how confident Jets fans are in the head coach and general manager. After…