The final injury report of Steelers week is here: 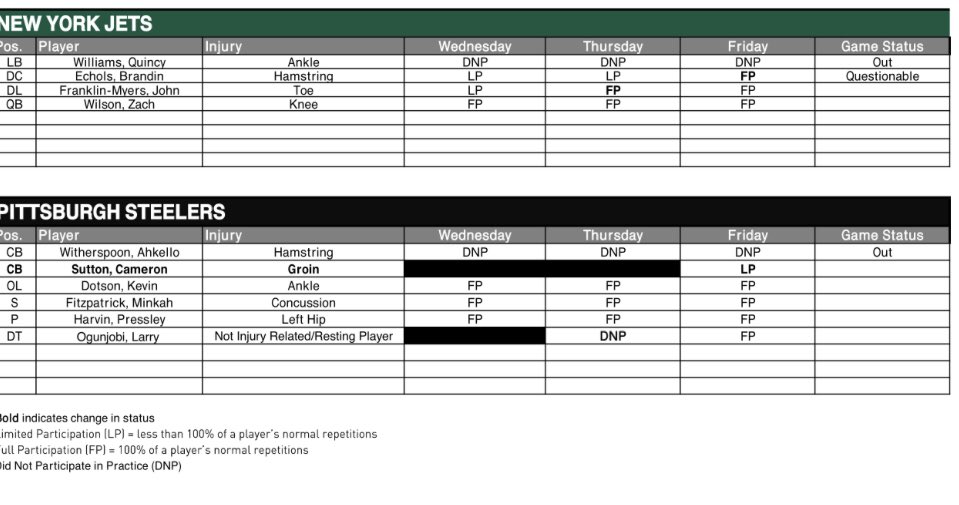 Williams was expected to be out, since he has a high ankle sprain. The Jets will need to decide whether to place him on injured reserve or not this weekend, although Robert Saleh indicated they might just reassess next week. The decision will depend if they believe it's a four-week injury, but also the Jets need to weigh up the fact that they're limited to eight injured reserve activations under the rules for this season and already have Vinny Curry, Duane Brown and George Fant slated to return at some point with only three games gone.

Kwon Alexander will start and Marcell Harris should see extra action with Williams out while Jamien Sherwood is also a candidate to see time. Look for either Hamsah Nasirildeen or Chazz Surratt to be elevated from the practice squad for special teams duties.

If Echols can't go, the Jets will presumably make Bryce Hall active this week and move Jeff Smith back into a full-time gunner role.

Witherspoon being out means the Steelers lose a starter, although Levi Wallace is an adequate replacement.

Link: Bent's five things to watch in the Steelers game