The Jets issued the final injury report for Patriots week: 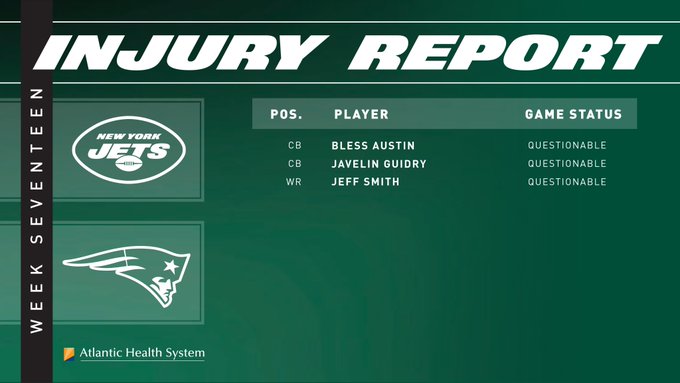 Austin missed the last two practices due to a non-Covid illness so the team might be without him on Sunday. Lamar Jackson could potentially find himself back in the starting line-up having not played since his mistake at the end of the Raiders game.

Greg Van Roten is expected to be activated tomorrow to start at right guard. There's still a couple of open roster spots, one of which can be filled with a temporary elevation from the practice squad due to La'Mical Perine being on the Covid-19 list. For these purposes, you can elevate a player who has been temporarily elevated as an addition to the 53-man roster the maximum two times.

Anyone who is not permanently on the 53-man roster at the end of the season will have to sign a futures deal to remain with the team next season. That includes any temporary elevations who will revert to the practice squad after the game.

New England will be without two of their starting offensive linemen and their leading rusher as David Andrews, Shaq Mason and Damien Harris have all been ruled out. A ridiculous 16 players have been listed as questionable.

Although the Jets' draft position has already been decided, two quarterbacks will vie to solidify their own draft futures…

With the Jets now having earned a couple of wins, has your confidence in the general manager improved -…