We're going to continue today's analysis with some things you might not have noticed from yesterday's loss to the Bengals:

Before we start, though, we already included plenty of analysis in our postgame takeaways which you can read here (via SNY).

Field position was a huge factor in Sunday's game. So huge, we decided to make a graph to show just how much of a factor it was.

This graph shows how many plays each team ran in each area of the field. Special teams penalties, superior punting and a solid return game were all factors in the Bengals' starting field position and then penalties were also the biggest factor once drives were underway. 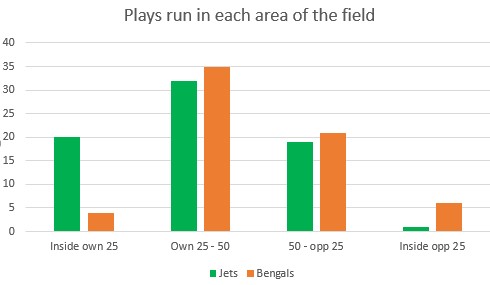 Ironically, the only Jets possession which didn't start inside their own 25 all day was also due to a special teams failure, this time on the Bengals side, as they missed a field goal so the Jets started at the 38.

That was their best starting field position all day. For the Bengals, their seven possessions in the second half began at their own 38, 35, 42, 43, 40, 36 and 43-yard line. For the Jets, it must have felt like the field was on tilt.

For a game with no turnovers and only a six yards difference between the total net yards of the two teams, that's a remarkable discrepancy and the added pressure the Jets put on themselves with penalties and poor execution on first down didn't help matters.

Since Neville Hewitt's return to the line-up, the defense has been excellent in the running game. He deserves part of the credit for that, because it's his job to get everyone lined up and he's almost certainly more comfortable in that role than James Burgess, who was wearing the headset in his absence.

Obviously it's still a far cry from having CJ Mosley directing traffic, but let's give Hewitt his due for the role he played in them holding the Bengals to 44 yards on 25 carries, even though he didn't make any stops himself.

Where issues are still arising is in coverage. To their credit, the Jets have been playing some effective zone coverages since Arthur Maulet and Blessuan Austin became starters on the outside. However, this leaves them open to coverage breakdowns that can lead to some key plays.

Whether or not Hewitt was directly involved in these, he is probably complicit to some extent as blown assignments should not happen if everyone is clear as to their responsibilities in a given look.

Let's take a look at a couple and see if we can figure out what went wrong. As it turned out the Jets weren't punished on either of these plays, but should have been.

This first one came on the first Bengals snap of the afternoon which is hardly a good sign. Here's the play:

What we can see is that both Austin and Brian Poole pass their man off to stay in underneath coverage. This leaves Marcus Maye in big trouble because he's now effectively got to cover two players so he reads it and deals with it as best he can by splitting them to hopefully remain in a position to limit the damage.

It's likely Austin should've stayed with his man, leaving Maye to pick up Poole's man and Poole to cover the back that leaks out into the flat. Alternatively, Poole should have dropped with his man, who ends up being targeted.

For both to pass off their man like that, this would require Hewitt to take a deep drop - which he does do from time to time in Tampa-Two style coverages. He's caught peeking into the backfield though, so it seems he doesn't believe that's his job.

Jamal Adams seems to be tasked with covering the tight end, so he just drops off into an area once that player stays in to block.

This play should have gone for a touchdown and forced the Bengals to settle for a field goal instead:

Adams jams the receiver at the line but then passes him off into non-existent zone coverage. Who should have stayed home here, though? Initially, Hewitt appears culpable, as the receiver runs right past him before he goes on a react blitz.

However, the root of the problem here is up at the top of the screen. Tyler Boyd runs a hesitation motion and Austin opts to follow him across the formation. However, Marcus Maye runs out to the left flat, seemingly telling Austin "I got this" and directing him to drop back into zone coverage in the middle of the field. Austin doesn't get the memo and they end up covering the same player.

Maybe Hewitt could have caught wind of the miscommunication and dropped off to cover the middle underneath, but it's a lot to ask. Unfortunately, while Austin has been very good so far when targeted, he perhaps isn't quite comfortable within the Jets' coverage schemes yet and teams may continue to look to find ways to exploit that when they see the film from this game.

Much more analysis to come later today and over the next few days. Please let us know who you'd like to see us feature in more detail in 3-on-D and 3-on-O.

This season, we're going to have a post after each game that breaks down some of the controversial decisions…

The Jets laid an egg against the previously winless Bengals this week and here, via SNY, is our in-depth…