Austin-Seferian-Jenkins crashed over for a "touchdown" in the fourth quarter, which looked to have cut the Patriots lead to 24-21. Considering they would later drive for a field goal and get the ball back into Patriots' territory one other time the fact this touchdown was controversially overturned legitimately cost the Jets a great chance to win this game and top the division.

This play is not as clear-cut as it looked at the time. There's several aspects at play, including several different rules, what actually happened on the play, what the replay booth had a right to look at on the review and the conditions which needed to exist for the call on the field to be overturned.

On the face of it, it seemed straightforward enough. Seferian-Jenkins broke the plane with the ball and the fact that he may have momentarily lost complete control shouldn't affect that, should it? However, it's more important than you might think.

To illustrate this, we need to set out the conditions that would need to have existed for the final call - that he lost the ball and its a touchback - to be correct.

First of all, it's a catch. No debate there. He caught it and turned upfield which clearly meets the condition for a football move.

Is it a fumble though? Did he completely lose control of the ball as he was carrying it. Indeed he does. Only for a split second, but clearly the ball is loose and he doesn't have contact with it as you can see in this image. 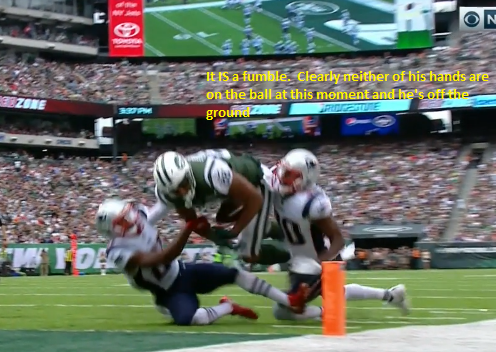 This is clearly before he hits the pylon, as the below image shows he has the ball back under control and it never moves again from then to the point at which he holds it securely at the end of the play: 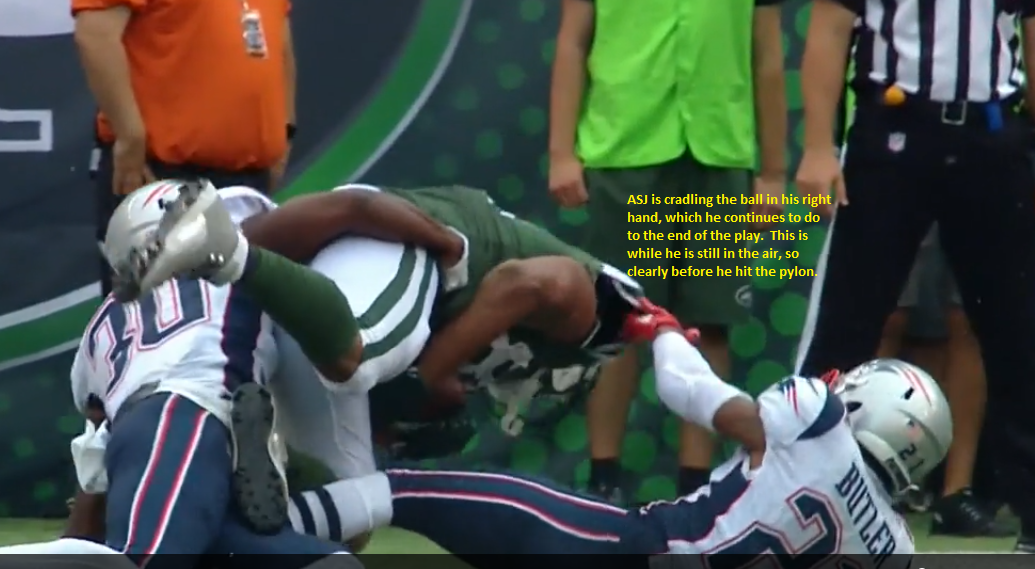 However, as the ball was knocked loose as he was in mid-air, the same rules as making a catch would apply to whether he can be ruled to have re-possessed the ball within the field of play. So, if he hits the pylon before he re-establishes himself within the field of play, he's out of bounds at that point so he hasn't re-established himself as inbounds with possession and it's a touchback. That's initially what the replay officials seemed to have ruled.

He did hit the pylon. But if you review the play closely he landed inbounds before he hit the pylon. His left knee hits, clearly inbounds, and that should be sufficient to re-establish that he has possession within the field of play.

At that point, the ball had broken the plane and you can see that he had re-possessed the ball cleanly before he hit the pylon, which we've already established was after his knee came down inbounds.

However, the official statement released by the official who made the call brings up a third possibility. They seem to accept that he made the recovery and that he was inbounds, but that he didn't maintain control of the ball after landing out of bounds and therefore didn't establish possession while in the field of play.

This confirms that they saw what I thought they saw and made the decision on that basis. Where we differ is in the assertion that Seferian-Jenkins doesn't "survive" the recovery as he rolls to the ground.

It seems clear enough that he doesn't lose the ball as he rolls over after contacting the pylon, although I'd agree that if he bobbled the ball after that point then he wouldn't have established possession inbounds.

And while it may look like the ball comes loose as he impacts the ground from certain angles, the ball remained in constant contact with and under control in his right hand from the point at which the image above established where he made (or re-made) the catch.

I would therefore dispute that part of the ruling and conclude that the video evidence confirms that he had possession, established himself inbounds and maintained possession.

But that's using the replay to its fullest extreme and looking at every aspect of the play to confirm the outcome. Should it even have come to that? No, not really.

Remember, the call on the field was a touchdown. This can only be overturned with indisputable video evidence. As demonstrated, the video evidence still arguably holds up even if you accept that there was a fumble.

The officials decided there was a fumble, and correctly so, but then missed the fact that he cleanly re-established and maintained possession of the ball in the field of play, probably because they were too busy patting themselves on the back for spotting the fumble.

This is the clearest and most important rule of video replay: If there is no conclusive video evidence to overturn the on-field ruling, you stick with the call on the field. And in every other situation remotely similar to this one, that's what happens.

You want to tell me the Patriots get that call overturned ever in a million years? Not a chance in hell. In fact, just a few weeks ago, they won a game on a late touchdown pass which was more than uncertain as to whether the receiver definitely had full control inbounds but guess what? Inconclusive video evidence so the call on the field stands.

As I always say, if it's in doubt enough that I can write 1,000 words on the topic (and I have here) then clearly I am disputing it. It therefore cannot be indisputable, because it is literally in the process of being disputed as we sit here. But, even if you ignore that rule and review the video footage carefully enough to seek absolute proof that the call should stand, you still can! I just did.

The officials stated that Seferian-Jenkins loses control of the ball as he rolls over, which does not appear to be the case based on the film. Even if you're not sure about that, is it clear enough to make the video evidence by which they overturned the call on the field indisputable? No way. So the call of a touchdown should stand.

It was a touchdown. It was a travesty. And the fact the team benefiting is yet again the one who needs and deserves the least help from the league makes me want to hurl.

Again, this call would never, ever, go against the Patriots which is probably just as well because we'd probably suffer through another decade of make-up calls if it did.

Oh well, I didn't especially want to scrape into the playoffs and end the season on a miserable losing note to some superior team anyway.

Much more analysis - on football, not officiating, I promise - to follow tomorrow...

QuickFix: Reviewing the rotations against the Patriots

Let's start today's analysis with a quick review of the rotations on offense and defense in yesterday's game. Defensive…

This was a game the Jets could have won had a couple of things gone their way, but in…