In the lead-up to the draft, we'll keep updating you on any interesting numbers from pro day workouts. Since our last update, the 2019 pro day has taken place for each of the following schools:

Here were the more interesting results:

Troy defensive back Blace Brown shaved a tenth off his combine 40: 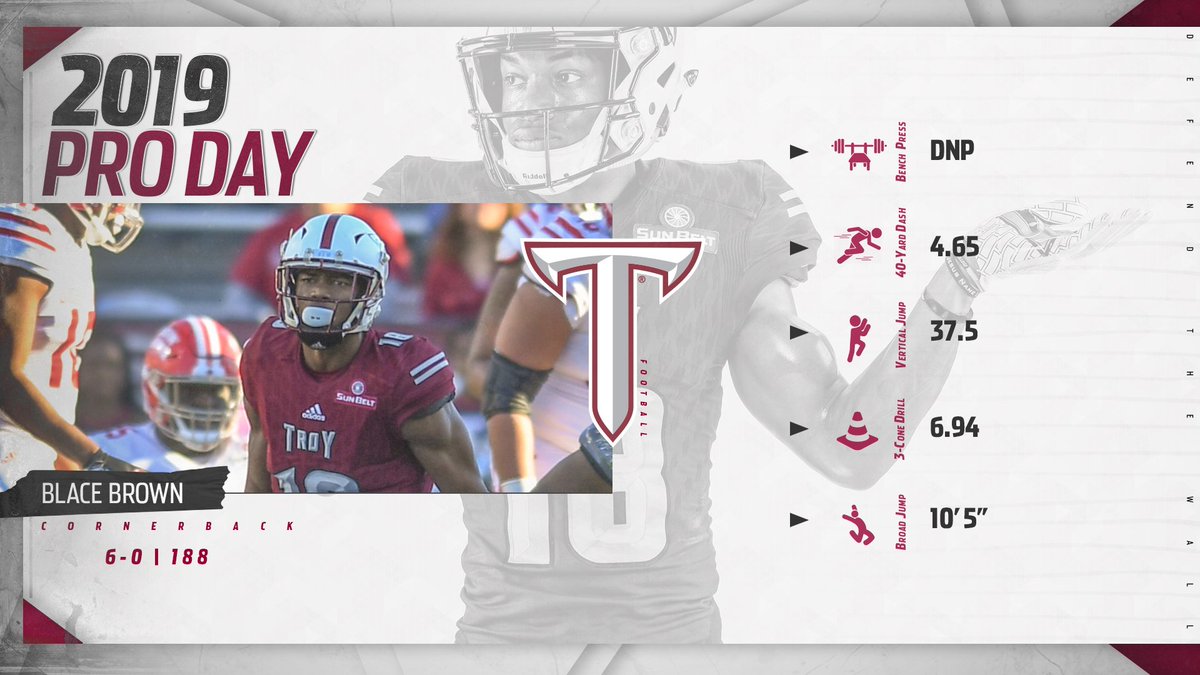 Offensive lineman Nick Allegretti, a combine snub, weighed in at 310 and posted a 29-inch vertical jump at Illinois' pro day.

At Arkansas' pro day, linebacker Dre Greenlaw - who didn't run due to a hamstring injury at the combine - ran as low as 4.65 in the 40-yard dash. The Jets showed some interest in offensive lineman Brian Wallace, a potential later round pick, according to Tony Pauline.

After a terrible set of combine numbers, Vanderbilt cornerback JoeJuan Williams may have resurrected his stock:

JoeJuan Williams landed just outside elite range for #RAS due to his poor Combine running. Pro day explosion and agility drills helped a lot, though I think his official 40 and splits from pro day will be right about where you'd expect them to be based on his previous runs. pic.twitter.com/iq1tuo8rUu

Most of the prospects at Oklahoma's pro day reportedly sat on their numbers while quarterback Kyler Murray's throwing session drew the most attention.

Here were the results from Wisconsin, where D'Cota Dixon dramatically improved on his combine time:

Deiter was said to have impressed during position drills and may have improved his standing to a mid-rounder according to Pauline.

With late-round linebacker Justin Phillips still dealing with a sprained knee, there was another standout at Oklahoma State:

One player who likely helped himself at his pro day this week was Okla. St WR Tyron Johnson.

New Mexico State linebacker Terrill Hanks, who ran just 4.99 in the 40-yard dash at the combine, posted a 4.5 short shuttle and 7.12 three-cone drill but didn't re-run the 40 due to a hamstring issue.

Central Michigan Pro Day:
CB Sean Bunting continued his strong postseason. After running a 4.42 at the Combine, he posted a 6.78 in the 3-cone at pro day.
CB Xavier Crawford ran in the 4.3's.

The main attraction at Tennessee was an edge rusher who has met with the Jets:

Former #Vols D-lineman Kyle Phillips seems to have helped himself this morning at Pro Day. Was timed in the mid-4.6 range in the 40-yard dash despite weighing nearly 280 pounds.

Defensive tackle PJ Johnson stood out at Arizona's pro day according to Pauline:

Rutgers' best prospect is still dealing with his recovery from an ACL tear and will probably run again closer to the draft:

Fresno State's pro day featured three combine participants, two of whom improved their numbers according to Pauline. Wide receiver KeeSean Johnson ran 4.5 in the 40-yard dash and a 3.81 short shuttle despite a slip, while safety Mike Bell (who was wearing Scooby Doo socks) knocked almost two-tenths off his combine 40. Linebacker Jeff Allison opted not to re-run though, which apparently irritated some teams.

Finally, at Syracuse, defensive tackle Chris Slayton sat on most of his combine numbers but did post an excellent 7.34 three-cone drill at almost 310 pounds. Receiver Jamal Custis also sat on his combine numbers, but Pauline reports that the Jets like him for his return abilities.

One day after signing a tight end, the Jets are bringing one back: Welcome back to NY, Eric!📰 https:…