It's customary for teams to head into camp with 15 offensive linemen, which are then divided up into three units for drills and scrimmages. However, it can be difficult to figure out the exact situation during offseason activities.

In recent times, the Jets have been very careful about revealing which position groups are working together, limiting photographs and video footage and sometimes even restricting what information beat writers are allowed to share about personnel groups. However, we can combine some flimsy evidence with logic and assumptions to get a good idea about how things will work.

The Jets currently have 16 offensive linemen on their roster but, of course, Mekhi Becton was out of action, so only 15 were available to practice.

Ordinarily, we'd approach a study like this by beginning with the starting line-up and working our way back through the reserves. However, the Jets' website published an image that gives us a pretty big clue as to who will be on the third unit: 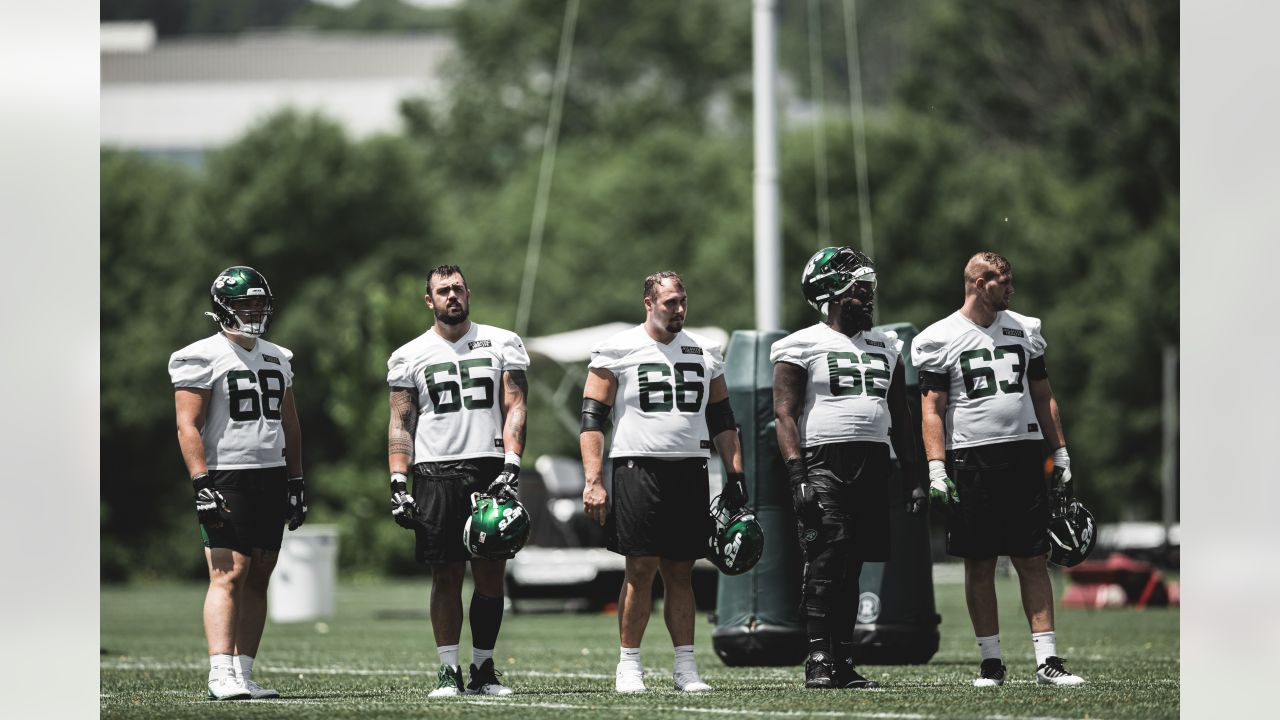 Pictured here, presumably in formation ready for their next rep together are:

It would make sense for the team to establish a third unit, made up of the players expected to have no realistic shot of making the active roster, so that these five can get used to playing together. That sets them up for preseason where if they have good chemistry, they'll have a better job of protecting the quarterback and ensuring the offense runs effectively to enable them to evaluate everyone correctly.

So, in effect, it can be the second unit which is the one in flux that requires some mixing-and-matching, much as its role would be during the season.

We know that the starting five is projected to be Mekhi Becton and George Fant at tackle, Alijah Vera-Tucker and Laken Tomlinson at guard and Connor McGovern at center. What does this tell us about the remaining six?

It's clear that Dan Feeney and Nate Herbig are expected to make the team as interior backups and that Chuma Edoga and Conor McDermott are currently battling to be the number three tackle.

That basically comprises four-fifths of the second unit, although of course Edoga and McDermott have both been filling in with the first unit. (George Fant has also been sidelined/absent for most of the offseason program).

As to who gets that fifth spot, it's notable that Greg Senat was working with that group and at one point even filled in with the first unit. However, Senat will be 28 on opening day and probably doesn't have as much upside as everyone on that third unit. Instead, he's a versatile player with experience in multiple systems (the Jets are his seventh team in five years) and once Becton and Fant are back it wouldn't be altogether surprising to see him released, therefore keeping that third unit intact. Alternatively, he could be a useful spare lineman to fill in whenever injuries arise.

The final name not yet mentioned is Max Mitchell. The fourth round rookie is a lock to be on the roster this year but could potentially be stashed and kept on the inactive list while he develops. Interestingly, although Mitchell has experience as - and has been listed as - a tackle, his natural fit with that second unit would be as a guard so that could be where he starts off this summer.

McDermott has played some guard, so it's not impossible they could get Mitchell some tackle reps with that unit. They could also get Mitchell to play tackle on the third unit in preseason if they want to get him some extra work.

In conclusion, to make a prediction of how this group will look if everyone is healthy when preseason begins:

Let's see if that's how things shake out once they get underway next month.