As we established a few weeks ago, the Jets have two restricted free agents; Arthur Maulet and James Burgess. What are their options with these two players though?

First, a quick recap of the rules for restricted free agency...

The Jets can opt to tender any of their pending RFAs at the first round level, second round level or on an original round tender. Alternatively, they can opt not to tender a player, at which point they will become an unrestricted free agent, or they can re-sign them to a new contract.

Once a player is signed to an RFA tender, any other NFL team can sign them to an offer sheet. That means they agree a contract with the player, which the team holding the player's rights then has the option to match. The player will then be signed under the contract agreed to in the offer sheet, either with his original team - if they match - or with the team that signed him to the offer sheet.

If the original team decides not to match, they usually get draft pick compensation in the upcoming draft. The three different types of tender set the level of compensation that will be paid. A first or second round tender are self-explanatory, while an original round tender entitles the team to compensation equivalent to the round in which the player concerned was originally drafted.

Once signed to a tender, the player is under contract for one season with a non-guaranteed amount dependent on the tender they were signed to. For 2020, the projected sums are as follows per OTC: 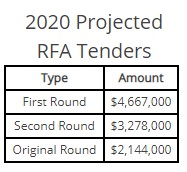 Burgess was actually released by the Jets in final cuts but they added him to their practice squad and then a series of injuries led to him being activated and starting 10 games. He surprisingly ended up as the Jets leading tackler with 80 tackles, adding half a sack, a forced fumble and an interception.

With Neville Hewitt set to hit free agency but Blake Cashman, CJ Mosley and Avery Williamson all due to return from injury, Burgess could provide the Jets with useful depth.

Maulet was also released by the Jets, this time in October. However, he was also re-signed due to a series of injuries and ended up finishing strong as he started the last six games. He ended up with 38 tackles, two passes defensed, an interception and a special teams touchdown.

The cornerback spots are wide-open for the Jets next year, with Trumaine Johnson and Darryl Roberts both potential cap casualties. Maurice Canady had a strong finish to the year but Blessuan Austin was benched after an impressive start to his rookie season. Whether Brian Poole returns to man the slot again remains to be seen.

There's no chance either of these players will attract an offer sheet if they are tendered at the second-round level, so signing them to a $3.3 million tender would essentially guarantee their spot on the team next year.

However, even if they go with the original round tender, it is still pretty unlikely that either player attracts an offer sheet. Even if they do, it's unlikely to be so high that the Jets would be unable to match it if they were really keen to keep either player. There would be no compensation if such an offer sheet were not to be matched, because each player was undrafted, but the risk of that is small.

Another option, aside from letting them walk, would be to non-tender them and then sign them to deal for less than the lowest tender. In both cases the players earned the minimum last year, so this could still be a healthy pay bump they could be satisfied with. As restricted free agent tenders are not guaranteed, the Jets could sweeten the pot with a small signing bonus or guaranteed sum.

We'll be looking at the exclusive free agents and unrestricted free agents as well as potential cap casualties in separate posts.