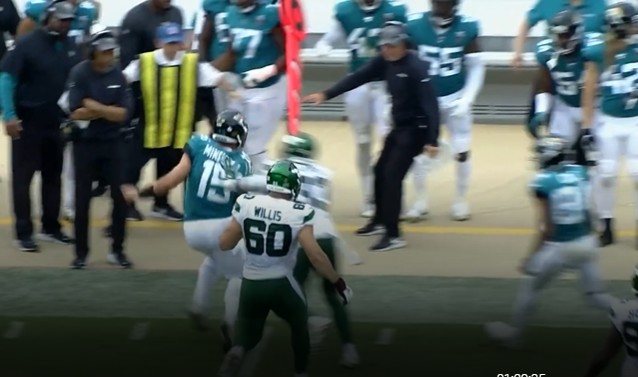 As for the second one, that was harsh on Adams too, as although he made contact near the head and neck area, he was making a play on the ball from the blindside and wrapped his arm around Minshew's shoulder in a perfectly acceptable fashion. However, Fatukasi also basically smashed his forearm into Minshew's face so roughing the passer was a correct call and it's possible that's what the officials saw and just called it on the wrong player.

There were a few missed calls in this game. One of the main ones that stood out were an obvious late hit on Anderson. Contrast this to the Adams/Minshew image above: 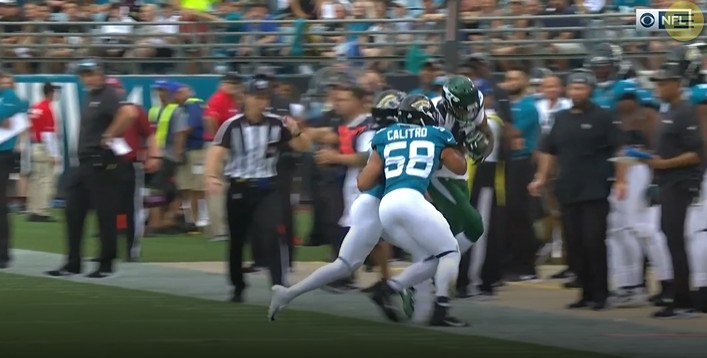 Austin Calitro didn't even make contact until Anderson was already out of bounds and then extended his arm to shove Anderson down. The Jets did score anyway on the drive, though.

Aside from that one, Nate Hairston got away with a pass interference on one play and Blake Cashman was the victim of an uncalled helmet-to-helmet hit after his fumble recovery but the one that was really frustrating was this one:

C'mon man, I know this is veteran on rookie but that's a hold. And it prevented Quinnen Williams from making an important play on an otherwise quiet day for him, while the game was still in the balance at 22-15 in the fourth quarter.

The other play that's worth discussing is the non-call for taunting on Brian Poole who clapped in Fournette's face after a third down stop. The only logical reason for the flag to be picked up is that Poole was clapping and then Fournette elected to square up to him, effectively putting his own face where the clapping occurred.

That's fair enough because Poole obviously has a right to clap after a stop. However, for Poole to demonstrably continue to clap long after was necessary and even continuing to do so after a flag was thrown was really dumb, should probably have been flagged and was arguably worthy of a benching even if it wasn't.

But maybe any chance of being able to hold players accountable for penalties went out the window when Adams undermined the coaching staff by being so vocal about having been temporarily benched in the Browns game.

Finally, the replay booth was called into action once, on a circus catch by Demaryius Thomas. The ball looked like it may have hit the turf but it wasn't clear enough to overturn. That's one that probably stands as whatever is called on the field.

We've been breaking this week's game against the Jaguars. We wrap up today's analysis with a look at the…

QuickFix: Saucy Nuggets from the Jets' loss to the Jaguars