We're going to continue today's analysis with some things you might not have noticed from yesterday's loss to the Jaguars:

The Jets were undermanned at the linebacker position this week, forcing practice squad call-up James Burgess to take over the headset and play the Mike position. Not unexpectedly, Burgess made a few mistakes and the communication was lacking on a number of plays. The Jaguars were able to exploit this to keep the chains moving and on a couple of big plays.

Perhaps suspecting that Burgess might be overmatched at times, the Jets tried to scheme in some different looks this week, hoping to confuse Gardner Minshew into making mistakes and rattle him so he'd be less apt to exploit any defensive errors.

However, you wonder if the Jets instead over-complicated things and left themselves open to individual errors of their own making. 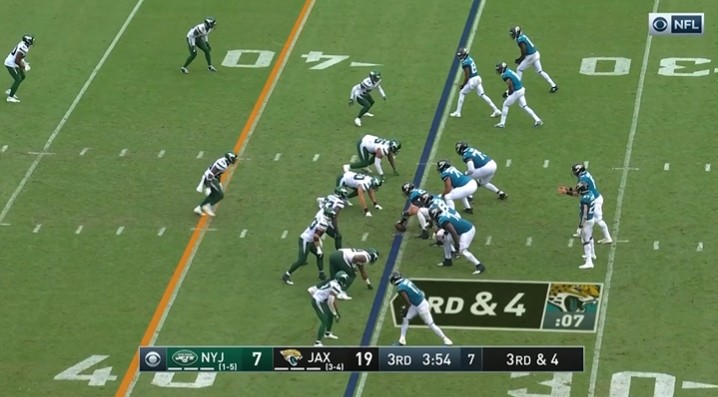 That's the formation they worked out of when Leonard Williams sacked Minshew only for it to be called back due to a penalty. However, in the play that the above image comes from Williams got some pressure around the edge but Minshew simply stepped up and ran for the first down, which perhaps isn't surprising when you've got lighter players matched up with interior linemen in the middle of the field.

Another factor in these pass rush packages was Brian Poole blitzing from the slot with Marcus Maye coming up to pick up the slot receivers. Which is great, if he gets home, but otherwise means you've taken one of your best coverage defenders out of the secondary and sacrificed your deep cover.

The other thing they did a lot of in some of their blitz packages was to have edge defenders dropping into coverage. Again, the Jaguars exploited this with crucial third down conversions as the back easily beat Tarell Basham on one play and Jordan Willis on another.

Obviously the Jets know their edge rushers are far from elite and are trying to create pressure by having players rush from all angles. However, when you're facing a banged-up left tackle and a rookie right tackle with six sacks and eight penalties allowed, perhaps just let your edge rushers rush off the edge?

After all, Willis came off the edge and had a strip sack in the first half. He should get more chances to do that.

Entering yesterday's action, Pro Football Focus had the Jets ranked number one in the NFL for tackling. In total, they had just 32 tackles on defense in the first six games, with nobody having more than five.

In yesterday's game, they had 12 in the first half alone. Furthermore, five of these were in the backfield. They improved in the second half with just two in the third quarter and none in the fourth.

In all, this was more of a widespread problem than any one player making a series of errors. 10 different players missed at least one tackle with Kyle Phillips, James Burgess, Jamal Adams and Jordan Jenkins guilty of missing more than one.

If not for that breakdown on the Fournette run, the Jets run defense was amazing. On 24 other carries by their running backs, they gave up just 17 yards.

The Jaguars weren't alone in struggling to have any success running the ball. The Jets had just two first downs on the ground, one on a Vyncint Smith reverse and the other on a fullback dive by Bilal Powell.

This is a troubling statistic:

Bell used to be fun to watch, but his style can be frustrating when it doesn't yield results. Yes, he has an amazing knack of slipping the first couple of tackles and finding a lane to fall forwards for a few yards, but when that's all he's giving you, it's a total letdown.

Sometimes you'd just like to see some burst, somebody hitting the hole hard or turning the corner to go around the edge. The assumption is that the lanes aren't there and a more direct runner would simply get stuffed over and over, but when Bell's tip-toe through the daisies style isn't getting results you can be forgiven for yearning for a more aggressive change of pace.

Unfortunately, whenever Montgomery or Powell gets a carry, they seem to operate in the same style as Bell. And, sadly, with about the same amount of success.

There's no doubting his talent and how hard he's working, plus he's also been an excellent role model and locker room leader, but Bell isn't helping the Jets much at all right now especially considering what they're paying for him.

And, for a player who was supposed to help out in so many other ways, they don't seem to be maximizing his production anywhere else either.

Much more analysis to come later today and over the next few days. Please let us know who you'd like to see us feature in more detail in 3-on-D and 3-on-O.

This season, we're going to have a post after each game that breaks down some of the controversial decisions…

If possible, this game might have been even more disheartening than last week's. The Jets had multiple self-inflicted wounds…